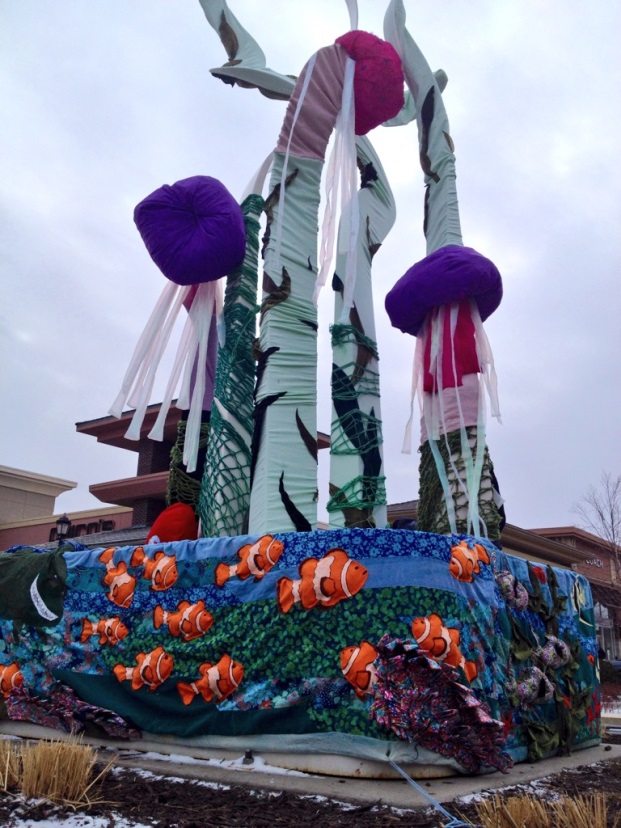 Aquarium at the Pointe

In late 2013, I was invited to reinterpret the sculpture in the center of Village Pointe in a temporary public art installation (see press release below). That led to a second installation in 2015.

2017, I installed the Untitled Public Weaving Project as part of the Nebraska Surface Design Association Show at the Hot Shops. I collected recycled materials, purchased, but unused yarns and other miscellaneous fibers and doo-dads and left them out with the loom for the public to get involved in creating the piece.  The piece roamed to the Apollon a couple months later allowing more members of the community to participate.

In early 2018, an Omaha Girl Scout, Abbey Dyer, working on her Gold Project invited me to be part of her team to enhance the children’s area of a local food pantry. My role was to pull together a mural to cover roughly a 10×10 cubicle (on both sides as needed). I encouraged the scout to gather recycled paint and she secured donations of drop cloths, which I prepared for her and her friends to paint.

Late that year, the staff at Heartland Equine Therapeutic Riding Academy in Gretna asked me to create a “selfie wall” for their stable. Inspired by their horses and working with folks with different abilities, I chose to use one of their mini-horses, Shorty as my model.

Public Art takes a lot of energy and engineering, but I have found it is one of the most rewarding endeavors I can engage in as an artist.